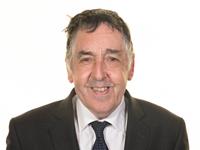 During the past year I have attended all Full Council meetings and sat on the Health and Adult Social Care Scrutiny Committee, also keeping in touch with the Police.

In Godshill I arranged meetings for residents in Bathingbourne and Lessland

Lane regarding drainage and safety at the Lessland Lane junction.

The car park has been resurfaced but there have been problems with cars being left there, I also arranged for the hedges to be reduced in height to improve visibility.

When the works at Bow Bridge were made known I contacted Island Roads with regard to bus services and made representations. A shuttle bus was provided and worked well.

I was humbled to lay a wreath at Godshill for Remembrance and recently took part in a quarter peal (bellringing) as a farewell to Father John and Mrs Ryder.

In Wroxall there have been problems with litter and group called Wroxall Wombles have been doing some good work.

I have arranged meetings for both Parish Council Chairmen with Planning Officers.

Many potholes in both parts of the ward have been reported to Island Roads.

I have arranged meetings for Environment Officers to meet with the Parish Council Chairman and matters such as dog fouling and litter in the car park were discussed.

Residents were concerned about the handrail that had been ripped off of the steps up to the old railway line this was repaired by Rights of Way.

The railway line was very wet with lots of old leaves so I arranged to have it swept.

Scam calls and internet scams have been prevalent this year and I have spoken to Trading Standards for advice about informing residents.

I have tried to do my best for the residents of Godshill and Wroxall and also the Parish Councils.